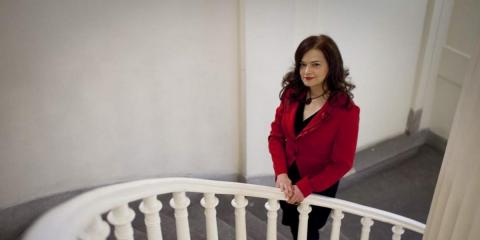 A multidisciplinary and transnational research team, in which Professor Judit Sandor is one of the Principle Investigators, received the prestigious European Research Council (ERC) Synergy Grant this week for a six-year project that seeks to reconstruct the development of a common European identity after the Second World War.

The project is called LEVIATHAN (Taming the European Leviathan: The Legacy of Post-War Medicine and the Common Good) and the funding for the CEU team that will be built by Professor Sandor is close to 2,4 million euros for six years. The total amount of the grant is close to 10 million euros – the maximum amount of the ERC Synergy Grant.

The team will collaborate with historians, bioethicists, lawyers, sociologists, and anthropologists to explore the similarities in the values attached to health, biomedicine, and health care across Europe and the common roots of the ethical principles behind health legislation in the European countries, East and West.

Histories of postwar Europe have usually focused on the divisions of ideology, the competing economic systems, and the contrasting political structures that separated Western and Eastern Europe from each other. This project is distinguished by its multidisciplinary approach in which the conceptual, institutional, and legal frameworks of pursuing the development of common good are going to be studied in the two sides of Europe.

Thus, on the one hand, the life sciences’ claim to universal truth offers a privileged perspective beyond the usual oppositions of ideology, economic and political systems. On the other hand, medicine and health care systems are socially, politically, economically, technologically, and culturally determined more than nearly any other field of our modern life. The innovative approach of the project, which applies medicine as an analytical lens, goes beyond its heuristic methodology. Rather than merely studying postwar Europe’s two halves separately the researchers aim to understand Europe as one.

“By reconstructing the genealogy of common values and principles attached to health and life sciences in Europe, we can develop a better understanding of Europe’s present and find answers to future challenges for preserving European identities” Professor Judit Sandor believes. She will look at the legal and bioethical component of the similarities between various European policies of biomedical science and health care.

The European Research Council was established by the European Commission in 2007 to fund investigator-driven scientific and technological research conducted within the European Union. The prestigious Synergy Grants are given to top researchers in all disciplines for groundbreaking research projects that significantly advance the frontiers of knowledge, to cross-fertilize scientific fields, and to encourage new productive lines of enquiry and new methods and techniques, including unconventional approaches and investigations at the interface between established disciplines.

Hungarian lawyer and bioethicist Judit Sandor is a full professor at the Faculty of Political Science, Legal Studies and Gender Studies at Central European University. She has taught at CEU for 20 years and is the supervisor of many successful PhD dissertations. Having passed the bar exam in Hungary, she subsequently practiced at Simmons & Simmons, London, UK.

Upon graduation from ELTE (Eötvös Loránd Tudományegyetem, Budapest), Judit Sandor worked on Hungary's first informed consent forms. With two molecular biologists she developed the first Bill on Genetic Data which later because a Parliamentary Act. In 1996 Sandor received her PhD in Political Science and Law from the Hungarian Academy of Sciences.

Judit Sandor was a founder of Szoszolo, the first patients' rights organization in Hungary. She is a member of the Hungarian Science and Research Ethics Council, and a member at the Hungarian Human Reproduction Commission.

Professor Sandor's international profile is further cemented with roles at various international organizations. In 2004-2005 she served as the Chief of the Bioethics Section at the UNESCO. She wrote the Explanatory Memorandum of the 2005 Universal Declaration on Bioethics and Human Rights. She has completed many research projects funded by the European Research Commission in the field of biobanks, genetic data, stem cell research, organ transplantation, neuroscience and human reproduction. In 2005 Judit Sandor established CEU's Center for Ethics and Law in Biomedicine (CELAB) where she is currently Director.

Professor Sandor is the author of numerous books in the field of human rights and biomedical law.